I woke up really early today. Not too early for some people, but for me waking up in 730am in the morning is frigging early.

I’m officially having my two weeks break holiday after finishing my last paper yesterday, which is pretty sucks. After the paper I headed out to KL to meet Juon, a friend of mine. We went to to Pasar Seni, Jalan TAR and KlCC. Yeah I met Fayadh at KLCC, and he looks pretty cute on his work outfits. And Sorority Row was a great movie. Really.

I do have tons of things to share with you guys. From a crazy day trip to Cameron Highlands with my friends, to a glass breaking accident I had during berbuka buffet at Pick n Brew and on how my stupidity almost drift a boy that I’m falling in love with away from me. But, you guys are not lucky enough, I’m not going to tell any of it today.

But my post today is especially dedicated to my beloved brother, the only sibling I have, the person I love the most, no matter how hard I scream or how often I curse him.

My brother and I share a special bond. He is 7 years older than me and we've stuck together through thick and thin. He has been one of the few people in my life that I can rely on. I grew up in a very small family. In our early childhood, I always admire my brother. I always got my older brother's clothes, and we always shared our toys and things. I thought he was the coolest person on the world. I want to be just like him. And no matter how hard I was on him, he barely mad at me.

He is special to me. These are just some of the reasons I admire my brother, love him, treasure his friendship and am proud to be his sister. I am thankful for him in many ways. We have had our ups and downs but in the end we are really close. He has always dropped whatever he has going to help me whenever I needed him.

Who could ask for more?

And he’s leaving this 21st October to Mecca to perform ibadah Haji. I never have been away for him, not this far. And it struck me, the fact that we are adults now, and later he will have his own family, and he will not always there for me, not like before.

But no matter where he is, whatever his doing, I will always pray for him and his happiness. 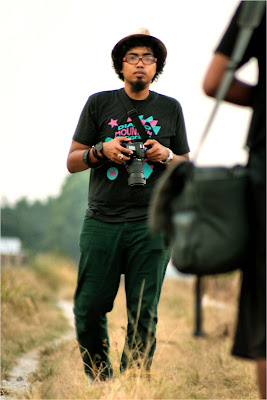