I was having a problem to synchronizing my iPod with my iTunes for the past two days. It was such a pain in the ass. At first I thought it might be something wrong with the cable, so I’ve borrowed Yun’s cable. But still the iPod still won’t sync. 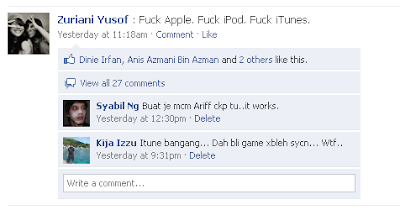 So I did some Google-ing and found out many people are facing the same problem too. Some of the website I found through the web suggesting me to either restore the iPod or use the DFU mode. And some of my friends on Facebook suggesting me to re-installed the iTunes. I did all of those but still it was such a fruitless effort to synch.

I’ve tried to install the old version of iTunes, just in case the latest version didn’t support my iPod. But I was such a waste of time.

It’s hard to believe it's been ages since I first installed Winamp on my laptop. So, is Winamp a viable alternative to iTunes? In the end it'll come down to preference. For some people, the differences between Winamp and iTunes won't be compelling enough to make the switch. For me, Winamp Remote would definitely seal the deal if I were a regular PC user. Through this Web interface you can access your home music library no matter where you are. All that's required is a Web browser.

Now I can kiss my iTunes good bye.