What will happen to my Facebook after I die?

I was browsing through Facebook, and somehow I ended up clicking on my late friend’s page. She passed away last year and she was only 20. She still gets hundreds of posts not only on her Facebook wall, but also on her blog and other page also. And the funny thing is, I am among of them who keep posting on her wall. The increasing speed of communication via the Internet has become something of a cliché. But in this instance, I witnessed how Facebook played such an active role as a structure for rapid communication.

Personally, it's really nice to write something on her wall, even if she isn't there. She went really suddenly, and I didn’t have the opportunity to say goodbye and then occasionally something will happen that reminds me of her. And it's just nice to read her profile and remember her. I find the Facebook wall to be something of a voyeuristic experience. In this case, there may be comfort found by sharing the grieving with others in her community of friends. After she passed away, a lot of the comments had a slight tone of sadness, showing how they missed her, and a sense of soft, saying that “she will be missed".

Maybe one day, everyone will just stop posting but even though it may sound morbid, I was wondering what will happen to her Facebook. I think it would be such a pity if it disappeared because so many people have commented and I was also wondering about her. I still put her at the top of my MySpace top friends. And I still have her YM and MSN in my contact list. And I don't want to remove her yet. I can't remove her from my friend’s lists. I just can’t. It just seems awful. I think we're all still in the stage where we will mention her and be in a shock again. It's so weird to think she's not here and it stuns you every time.

I guess I don't find it so strange to have people posting comments to the site of someone who are deceased. I’m wondering what will happen to my Facebook after I die. Honestly? I want my Facebook to keep on active even when I died. And I would love to have people writing on my wall saying how much they missed me. 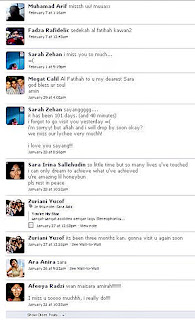